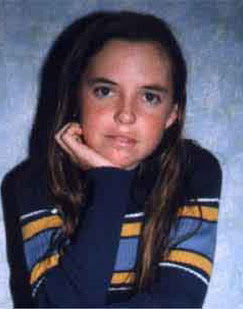 
Updated 22 June 2011.
Circumstances: Whilst walking and getting lifts to get to her new job, Hayley made a telephone call at about 10.30am on Thursday 29 July 1999. She was then given a lift by a lady to the North West Road, Badgingarra, WA. At around an hour later at 11.35AM she was sighted by a motorist on the North West Road walking towards the farm where she was going. That was the last reported sighting of Hayley.

At the time of her disappearance Hayley was wearing, light brown hiking boots, blue denim jeans, black v-neck top, grey men's jacket with a hood, silver sunglasses and carrying a light brown backpack with the word " EQUIP" on the flap.

There has been no trace of Hayley since the morning of 29 July 1999. The only information about what may have transpired has been from convicted prisoners who are making self serving statements about comments allegedly made by other prisoners. This is undoubtedly compounding the pain felt by Hayley's family.

The general consensus is that sometime after her disappearance Hayley died as a result of foul play and her body dumped. This is based on the unsigned statements of convicted thieves, liars and murderers and statistical results of other disappearances.

The Dodd family are a wonderful caring family seeking nothing more than to have answers to their daughters disappearance. If you have any information or suspicions in this case please act on them as a matter of urgency.

(left) Margaret Dodd.
Exclusive: A CADAVER dog arrived in WA from Queensland on Monday to search the area around Badgingarra for missing Mandurah teenager Hayley Dodd.
Margaret Dodd said labrador Baz was her last port of call in searching for her daughter Hayley, who disappeared while hitchhiking in July 1999.

After a police investigation failed to shed light into what happened to the 17-year-old, Mrs Dodd tried Aboriginal trackers, a private detective, a geographic profiler and clairvoyants to find answers.

With all other avenues exhausted, she said everything was pinned on the cadaver dog.

“It will be 12 years since Hayley went missing on July 29, but I hope we won’t get to that date without finding her.”

Mrs Dodd said cadaver dogs were trained to track bones and could find body remains after many years.

Mrs Dodd has been planning to use the cadaver dog for a year.

Her family raised money for airfares and accommodation, while dog handler Martin Dominick offered his services free of charge.

HAYLEY Dodd's heartbroken mother says she will never give up on finding out what happened to her daughter, despite an 11-year lapse since the teenager's disappearance.

Margaret Dodd said her family had painstakingly mounted independent searches for Hayley, desperate for answers amid concerns that police had bungled the investigation.

They also called for a coronial inquest, but a date is yet to be set.

Hayley was 17 when she was last seen walking along North West Rd near Badgingarra in the WA wheatbelt on July 29, 1999, after picking up a lift while hitch-hiking.

Mrs Dodd said she was angry that police had not kept her abreast of developments in the case, including the latest man to come forward with a claim convicted killer Robin David Macartney had confessed to being involved in Hayley's disappearance.

She said police had only confirmed the development to her when she questioned them after being alerted by The Sunday Times.

"Whoever is responsible for Hayley disappearing is still out there and I still desperately want them to be caught," Mrs Dodd said. "I get annoyed. Police should be telling me everything. I shouldn't be hearing it from the media."

Macartney, who is serving a life sentence for the murder of Lalita Horsman in Geraldton in December 1999, has long been considered a suspect in Hayley's disappearance. But police have been unable to pinpoint his precise movements on the day she went missing.

Mrs Dodd said she did not believe police had done everything they could to rule Macartney out of their investigation into Hayley's disappearance.

In 2005, Mrs Dodd and her husband Ray visited Macartney four times in Casuarina Prison after the killer requested a meeting, claiming he had information about Hayley's case. During the meetings, he denied having anything to do with Hayley's disappearance but named a person whom he believed had not only killed Hayley, but was also responsible for Ms Horsman's murder.

Macartney also sent Mrs Dodd a copy of a police videotape, which showed graphic footage of the police recovery of Ms Horsman's body, to which he had controversially gained access in preparation for an appeal against his conviction.

"I felt like he was playing with us, trying to give us hope but not coming through with any genuine information," she said. "I don't sit there and cry anymore. I listen to the information and then try to see if there is any truth to it ...We want to know where she is, we need to know."

POLICE are investigating a startling breakthrough in the 11-year hunt for missing teenager Hayley Dodd, amid claims a convicted killer confessed to his involvement in her murder.
The Sunday Times can today reveal the Special Crime Squad has received new information about Hayley's suspected abduction and murder, one of WA's most mysterious cases.

Macartney, who is serving a life sentence for the murder of Lalita Horsman in Geraldton in December 1999, has long been considered a suspect in Hayley's disappearance, but police have been unable to pinpoint his precise movements on the day she went missing.

The released prisoner claims Macartney, who is known by his middle name David, told him he had killed Hayley because she would not have sex with him.

In an earlier conversation it is claimed Macartney told the former inmate he knew the whereabouts of Hayley's body.

In a copy of the former prisoner's statement to police, made to Det-Sgt Geoff Buck on August 27 this year and seen by The Sunday Times, the released prisoner also claims:

* He found a file of newspaper clippings about Hayley and two articles stuck on the wall of Macartney's Casuarina Prison cell while snooping when Macartney was in hospital in 2009.

* A photograph of Hayley's mother, Margaret, was uncovered in Macartney's cell with holes in her face that appeared to have been made with a pen. The word "bitch" was scawled above her name.

* He overheard Macartney discussing Hayley's disappearance with at least two other inmates at the jail, each time recounting that he had been different distances from where Hayley was last sighted on the day she disappeared.

The Sunday Times has strong information that police and prison authorities conducted at least two raids of Macartney's cell in recent weeks and that items had been seized from his living quarters.

While police said the cell raids were not related to the Hayley Dodd case, Mrs Dodd said detectives had confirmed to her they had been investigating the new claims for about two months and had searched Macartney's cell.

Mrs Dodd, who visited Macartney in jail in 2005 after he contacted her saying he had information about Hayley's disappearance, said she was only alerted to the heightened police investigation after inquiries made by The Sunday Times.

Police contacted her again on Friday asking her not to comment publicly on the latest claims.

But she described as "disturbing" the account that Macartney had news clippings of Hayley in his cell.

Hayley vanished after she hitched a ride from Dongara, where she was working as a roustabout, on July 29, 1999. She was last seen walking along North West Rd, near Badgingarra, about 200km north of Perth.

Police are convinced Hayley was abducted and murdered, though her body has never been found.

Ms Horsman, 27, was suffocated and her body dumped in the sand dunes of a Geraldton beach five months after Hayley disappeared.

The former prisoner, who was released from jail this year, claims that he spoke with Macartney on several occasions about Hayley's disappearance after a TV news report on June 28, 2009, named him as being a suspect in the case.

"I ask(ed) him, 'What happened, how come they accused you of murdering Hayley?'," the former prisoner said in a statement.

"He said, 'I was accused of it because they accused me of killing the girl in Geraldton and they thought I killed Hayley before I killed her'. He said, 'But I do know where the body is because the person who killed her told me where her body is'.

"I said, 'That can't happen. I think you should tell the police where the body is so the mother can have closure to this'. He said, 'No, that would spoil my appeal'."

In the statement, the ex-prisoner said: "It troubled me what David said to me, no one would know where the body was unless he was the murderer, that's what I thought."

He said, while Macartney confessed to knowing where Hayley's remains were, he did not detail the location.

The man claims that Macartney gave him his cell key so he could clean up before he returned from hospital where he was having treatment for bowel cancer.

"On his wall he had pictures and news items cut out of the newspaper about Hayley Dodd," the statement said. "There was only two on the wall, they were from 2009."

Inside the cell, the prisoner says he found two plastic files with newspaper clippings about Hayley's disappearance and other cases involving Dannie Wright, who was convicted for raping and murdering Chinese student Jiao Dan in Innaloo in October 2007, and American Dennis Maher, who was exonerated after serving 19 years in jail for raping three women in 1983.

"The red folder was all about Hayley," he said. "I saw some clippings had red ink around them.

"There was one picture of Margaret Dodd and it had holes in her face. It looked like the holes were made with a pen. The word 'bitch' was scribbled above her name."

The prisoner said, when he heard the prison guards coming, he returned the files to where he found them and never spoke to other prisoners about the find.

He said he told Macartney that he would give him an opportunity to go to police, but if he had not contacted them by June then he would.

"I'm telling the police this now as he didn't tell the police himself and the family needs to know and they need to get Hayley back," the statement said.

"One person could be lying, two perhaps collaborating but three people . . . there is no doubt Macartney is saying these things," she said.

A Department of Corrective Services spokesman said he was unable to comment or release information about operational or security issues regarding individual prisoners.

A $250,000 reward has been offered for information leading to the conviction of those responsible for Hayley's disappearance.